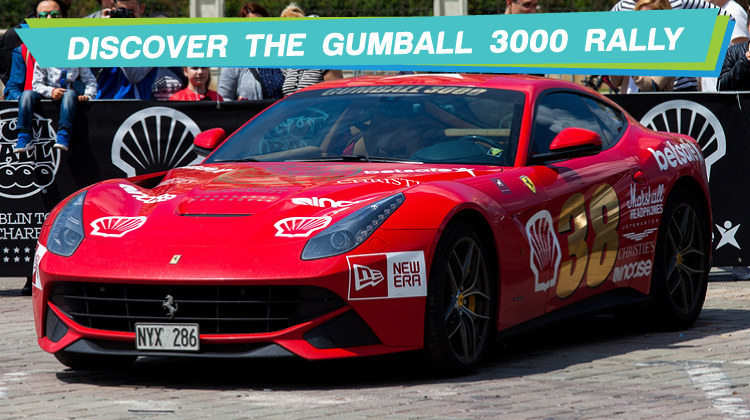 The Gumball 3000 is a yearly 3,000-mile international celebrity automobile race on public roads. The annual road rally was founded by Maximillion Cooper in London, England in 1999. Cooper wanted to create an event that would include cars, entertainment, fashion, and music.

It all began with a party at London’s popular Blue Bird Club. Celebrities such as singer-songwriter Danni Minogue, model Kate Moss, and filmmaker Guy Ritchie were gathered there prior to Sir Terence Conran officially dropping the checkered flag on the inaugural rally the next day. The first competition included 50 of Cooper’s friends racing from London, England to Rimini, Italy and back.
The rally participants raced through through Paris to the Chateau d’Esclimont, and from there to the famous Le Mans race circuit. They race route also included stops as the Ferrari Factory located in Maranello, Austria’s Ambras Castle, as well as Germany’s Hockenheim Grand Prix Circuit. The finish line was on London’s Park Lane. Memorable vehicles in this first contest included a Lamborghini Diablo, a Lotus Esprit and a Brit police vehicle from the English TV show “The Bill” driven by actress Alexandra Aitken.

The next year the second Gumball rally was held. Some of the celebrity contestants included Bruce Reynolds, model Tara Palmer-Tomkinson and Goldie and Cass Lewis who drove an Aston Martin V8. The rally ran from London’s Marble Arch to the Stansted Airport for a flight to Spain. Once the competitors arrived they raced through several locations including Bilbao, Cannes, Milan, Hotel Bühlerhöhe Castle, the Nürburgring GP circuit and the city of Hamburg, before setting back off for London.
In 2001 the third Gumball 3000, which ran from London to Copenhagen, Denmark and back, included 106 cars and was filmed for the BBC but also by MTV for a “Jackass Special”. It garnered the highest ratings of the year for the music cable channel. As it gained popularity it also received more criticism.

In 2007 the event became a major source of controversy when two retirees died in a car accident in the Republic of Macedonia after their vehicle was struck by a Gumball Rally racer. Competitors have also been stopped for breaking speed limits, had their driver’s licenses confiscated by law enforcement officials and even had their vehicles confiscated.

In 2015, the Gumball 3000 had a transatlantic race from Stockholm, Sweden to the city of Las Vegas, Nevada in the U.S. The route included stops in the countries of Denmark, Germany, Norway and the Netherlands. There were also stops in the cities of Reno, Nevada and San Francisco and Los Angeles, California.
The 18th most recent annual Gumball 3000 started on May 2, 2016, in Dublin, Ireland and finished in Bucharest, Romania on May 8, 2016. Dutch disc jockey, record producer and remixer DJ Afrojack was among the celebrity participants. The rally entry fee was approximately $42,983.

Today the Gumball Rally 3000 is a part of pop culture. Not only are the participants becoming increasingly more and more diverse, but one also can see the race’s impact on television, motion pictures and even the video game industry. Specifically, in 2003 actor Burt Reynolds narrated Gumball 3000: The Movie which was directed by Steven Green and in 2002 the first Gumball 3000 video game for the Sony PlayStation 2 was released.

Every year, Jettly arranges numerous private jet charters to and from the Gumball 3000 Rally area. Contact Jettly to learn more about chartering a private jet for you and your guests.