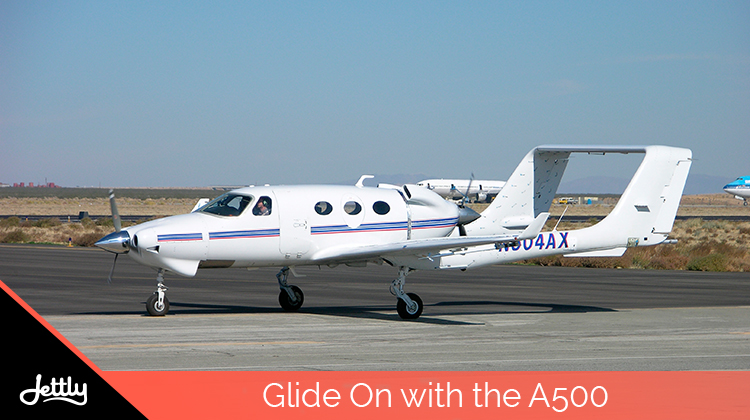 The Adam A500 is a plane you can distinguish at first glance. From its bridged tail to its peculiar centerline twin-piston configuration, it’s the type of aircraft that will simultaneously draw you in, while making you worry about your safety. Fortunately, despite the initial concern about the A500’s design, a ride down the craft is enough to prove that it’s far from the hazard it appears to be.

The A500’s history plays a big part in this. Created by Rick Adam in 1998, the A500 was made during a time when piston twins were perceived as a safety hazard if not handled correctly. This contrasted with the early perception that twin engines were significantly safer than single-engine flyers, and thus pilots who started with singles or single-pistons had to go through the additional hassle of getting the required rating to operate such an aircraft. Following the footsteps of the Cessna Skymaster—which had brought the centerline piston design into the public consciousness—the A500 was then made for those looking to make the leap from single to multiengine, minus the added hassle that comes with it.

That said, let’s delve a little further into what makes the A500 an interesting ride to the skies:

A new kind of double piston

For those not familiar with how a centerline double-piston craft works, it goes like this: instead of the engines being situated on both sides of the fuselage, one driver is placed at the front—like your typical single-piston plane—while the other is placed at the back. Both serve different purposes:

This is often called the push-pull configuration, which gives it the dynamics of a single-propeller craft with the power of twin engines. Aside from this, the centerline arrangement also gives it two distinct advantages:

Made for pilots, by pilots

Indeed, the Adam A500 seems to know what it’s doing when it comes to design choices. Aside from its centerline thrust configuration, it also makes use of carbon fiber, whose composition allows for a lighter aircraft and a more economic production process. (We talked a bit more about the benefits of carbon fiber in our feature on the Cirrus SF50 Vision Jet.)

One could say that much of this can be attributed to Rick Adam himself, who Airport Journals notes “isn’t afraid to challenge the established methods of building and certifying aircraft.” That said, many of the A500’s accouterments are based on Adam’s experience as a pilot, as well as ideas from Burt Rutan, who helped in the plane’s initial conception. Together, they’ve created a plane that sees through the typical problems of similar aircraft, while remaining sturdy and efficient enough to glide through the skies.

Take the Adam A500 for a ride yourself

With all the work put into the Adam A500, security and efficiency is something you’ll never be wont for. Fortunately, you can find the aircraft in our broad selection of carriers if you choose to travel with us. So what are you waiting for? Submit a flight request now.