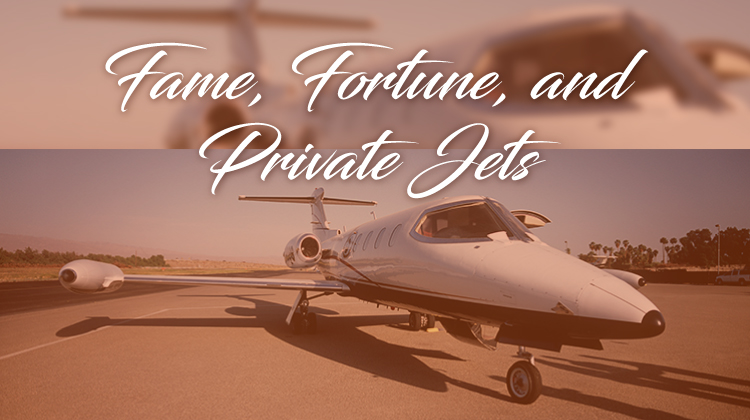 Held as a true mark of success, the world’s biggest celebrities perceive owning a private jet as identification for “having made it.” Being in command of your own travel, released from the constrictions of commercial airlines, these famous individuals understand the true value of freedom. But not all celebrities can afford to own one, so those who do belong in an elite class of their own. So who’s who in the jet-setting world? Let’s find out:

1. Jackie Chan: The international acting legend and recent Oscar winner is also a private jet lover, which is perfect for his action-packed lifestyle.

2. John Travolta: A pilot in his own right, a renowned philanthropist, and an excellent actor, John Travolta is the official ambassador-at-large for Qantas Airlines, owning a staggering 11 jets, including a luxurious Boeing 707!

3. Celine Dion: She wowed the world with her voice, and is also a role model for many around the world; her private jet is nearly as beautiful as her voice.

5. Donald Trump: Love him or hate him, there’s no surprise here. Billionaire, real estate mogul, and soon to be President of the United States Donald Trump boasts one of the largest private jets in the world.

6. Oprah Winfrey: During her commencement address at Duke University, where she was awarded with an honorary doctorate, talk show queen Oprah Winfrey said that owning a private jet is one of the marks of being truly successful.

7. Jim Carrey: A funny man he might be, but the Hollywood comedy king’s private jet is no laughing matter!

10. Harrison Ford: Star Wars and Indiana Jones legend Harrison Ford is another private jet lover. Although, that’s not so surprising when you consider all of those years piloting the Millennium Falcon!

Of course this list is nowhere near exhaustive, or else this article would be significantly longer. But from businesspeople like Donald Trump and Oprah Winfrey, to actors and philanthropists like John Travolta and Angelina Jolie, the caliber of people using private jets truly shows the mark of success a private jet exemplifies.