You are here: Home / Culinary Experiences / Elegance and Flavor Abound in Caelis, Barcelona 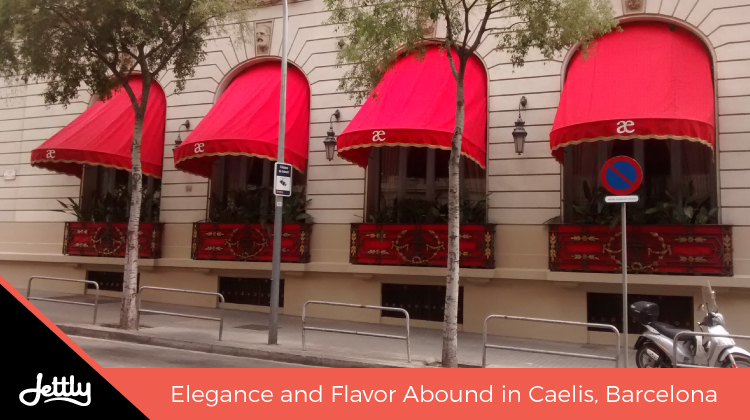 The city of Barcelona is a mixed bag of sorts but in the best way possible. For one, it’s home to a good number of beaches where one could rest and relax the day away. For another, it’s got a ton of amazing plazas, infrastructure, and restaurants that are sure to keep you always on your toes, ready for the next thing to see.

But while Barcelona’s many surprises make it a gem to explore, there’s nothing quite like its culinary world, which in itself is a league of its own. The city is home to 24 Michelin-starred restaurants, with two bearing the coveted 3-star status. And its street food scene is no slacker either—here, one would find some of the best tapas Spain has to offer, perfect for a midday chat before siesta, or a night out.

Among those with Michelin ranks is Caelis, located at the meeting point between the streets of Via Laietana and Carrer Jonqueres. Known for its unique interpretations on traditional fare, the newly minted Michelin-starred restaurant is one that is sure to captivate both the imagination and taste buds of those willing to take a trip to it. But how is it able to do this? And why? We look into it further:

A Michelin-starred chef in two countries

As with all restaurants, much of Caelis’ success can be attributed to its head chef, Chef Romain Fornell. But Chef Romain is no ordinary chef—he was named Best Young Chef in the Midi Pyrénées, and apprenticed in many a renowned French restaurant, and worked with the likes of Alain Ducasse and Michel Sarran. More importantly, after opening the Chaldette, he went on to earn his first Michelin star at the age of 24.

It was the road to Caelis that would eventually bring him his second Michelin star. Initially called Diana, Chef Romain was tasked with taking charge of it in 2002, turning it into Caelis 2 years after. With his experience in the field, Caelis would earn its first Michelin star in 2005 and would be granted the Restaurant of the Year award by the Catalan Academy of Gastronomy a year after.

Menus that excite the imagination

Under the helm of Chef Romain Fornell, then, one could imagine the creative concoctions that the establishment has to offer. And creative it is—the restaurant serves some of the most visually pleasing fares in Barcelona, with the taste to boot. For first-timers, you might want to try out their tasting menus for a piece of what it provides:

Going on an international food trip can be easily spoiled by an unsavory flight. Fortunately, with Jettly, you don’t have to suffer the same fate. Submit a flight request now.