You are here: Home / Private Jet Business / 5 Must Have Line Items in Your Private Jet Costs Budget 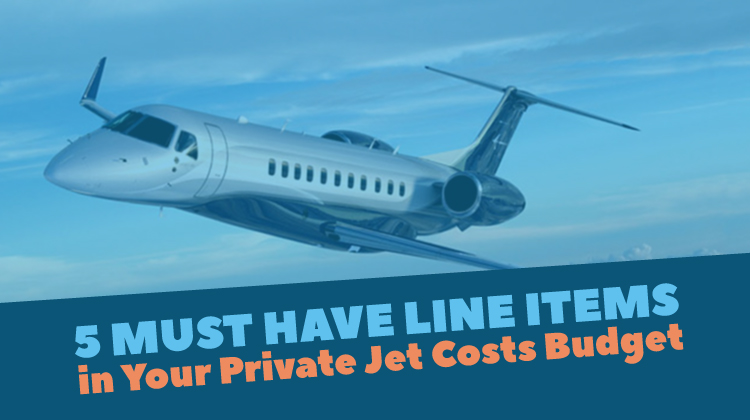 The cost of owning a private jet doesn’t stop when you’ve paid for the aircraft in full. A private plane comes with large operating expenses that you must factor into your budget when trying to decide whether or not you can truly afford one. Below we list the five major aspects:

Fuel makes up as much as 30% of an aircraft’s operating expenses and can vary depending on several factors. When possible, do research on fuel efficiency before selecting an aircraft for purchase. Also keep in mind that fuel prices can fluctuate a great deal, so take this into account especially when deciding on rates for charter flights.

Aircraft maintenance is also very expensive, but the alternative is a grounded plane that is still costing you in taxes and storage while not making you any money. Factor in the price of labor, spare parts, and consumables, and make sure to allot money for engine rebuilds. The latter is especially important if your airplane is nearing the end of its TBO (Time Before Overhaul).

Here you have two options. First is to pay for hangar rental, or to have your plane tied down at an airport. Tie-downs are less expensive, but it might be well worth it to pay for hangaring as it protects your aircraft from weather damage, thus saving you money on maintenance. The cost will largely vary on your location, as well as the size of your aircraft.
Another option is, if possible, leasing or buying the land and having your own hangar. Of course, in this case, you would have to factor in the costs of building and maintaining the hangar. If, however, you have extra space, you can rent it out to other aircraft owners to offset your costs.

For most aircraft, you’ll need to hire two pilots each: a captain and first officer (the captain’s salary typically being much higher than the co-pilot, in some cases twice as much). The salary will also depend on the type of aircraft, usually with higher pay for mid-size and large jets.
Apart from the pilots, you’ll also need at least one flight attendant per aircraft; if you’re chartering your jet, you’ll want to hire someone with VIP cabin crew experience.

The various taxes and insurance costs can also make up a significant portion of an aircraft budget. To make sure you maximize your savings (and avoid breaking policies and standards that could land you with steep fines), work with a highly qualified tax professional with knowledge of the aviation industry. There are also insurance companies who offer services specifically for aviation businesses, so work closely with them and discuss the scenarios that would fall within your coverage.