You are here: Home / Products & Gadgets / 5 Apps Every Private Jet Pilot Should Have 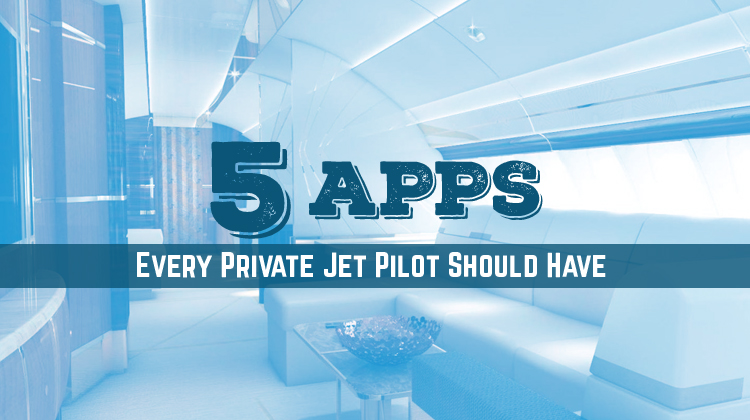 Last year, the Federal Aviation Administration (FAA) allowed pilots to replace their unbelievably-large stacks of navigational charts and manuals with digital navigation tools. Thanks to the rise of the iPad and other tablet devices, pilots are now able to contain thousands of pages of information in a much more manageable form!

Prior to the FAA’s ruling, it was common to see pilots headed to their planes with 40+ pounds of materials weighing down their flight bags. Now, much to their relief, they’ve been given the ability to replace their paper materials with digital means. With this shift in mind, apps are now becoming an essential tool in every pilot’s job. But that’s commercial airlines . . . what about private jet pilots?

The good news is that the following apps are available for everyone! When these apps, which don’t require WiFi to be valuable, provide a pilot with practically everything s/he needs for a flight, they can help save time and money. They can be used to conduct preflight checks, provide in-flight navigation, and review previous flights with a touch of the finger.

With this drastic shift in aviation tools, it’s more important than ever that private jet pilots do their research to determine exactly which apps they need to ensure a safe and efficient flight. We’ve put together some of the best apps available:

ForeFlight is a comprehensive app for pilots. It provides surface maps, fuel prices, flight-planning tools, flight support, electronic flight bags, navigation charts, flight notifications, and so much more. Yes, it basically does everything. It even won the Flying Magazine’s Editor’s Choice Award three years in a row!

There’s a reason that this has been the best-selling iPad aviation app for the past four years.

Xavion might be the most helpful inside-the-cockpit app for pilots. Xavion has the ability to actively monitor every runway in gliding range, while simultaneously plotting the best path to get to each one. This allows pilots to have multiple backup plans in case of an emergency (and the importance of this can never be understated!). Xavion takes into account multiple variables, including: runway length and width, headwind, tailwind, crosswinds, and the weather all along the way.

The FAA states that weather is the primary contributing factor in 23% of all aviation accidents. MyRadar Weather Radar attempts to address this issue by being the most accurate weather app available to pilots. It has many pilot-friendly features, including a TFR display and AIR/SIGMET overlays, which have made it a staple among the aviation community. Currently, it only shows weather conditions in the U.S. (which includes Alaska, Hawaii, and Puerto Rico).

LogTen Pro X offers pilots an advanced pilot logbook. It changes the way pilots log their flights by being the most advanced option on the market. LogTen incorporates valuable features, such as their “Fly Now” feature—a tap-and-go system where pilots tap a button to start and stop their flight log. LogTen automatically determines the departure and destination airports based on the iPad’s GPS. Using this data, it then calculates the total trip time and syncs this data to iCloud, allowing a pilot to access their information across any of their Apple devices.

Airports has more than 10,000 airports in its database, with runway data for most major airports. Think of it as an airport directory which allows pilots to plan their flights. Its key features include a world-wide VOLMET station list, NOTAMs, SNOWTAM decoder, METAR, and TAF reports. It also lets pilots add notes for frequently-visited airports, along with having access to online satellite images for each and every one of them.

With so many apps available on the market, it’s important that pilots do their research and choose the right apps to ensure a safe and efficient flight. Luckily, this isn’t a bad problem to have, especially when you consider that it means not having to carry 40+ pounds of charts and manuals!