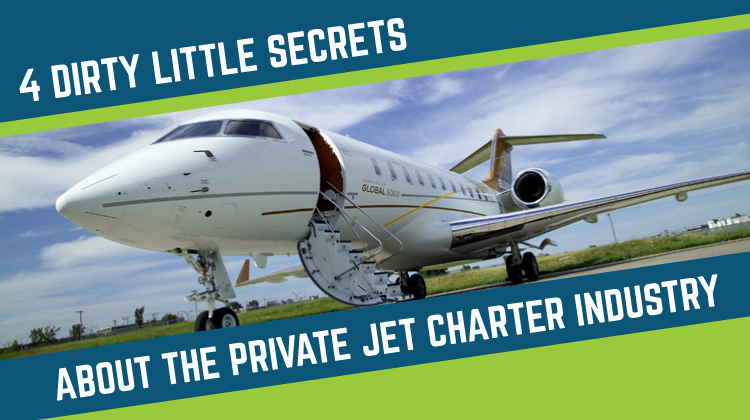 The private jet industry is growing exponentially, with the multibillion-dollar industry becoming increasingly prevalent in today’s society. With the jet industry becoming so widely-discussed, it’s easy to come to the belief that you know everything about the field; however, the private jet charter industry has its own share of baggage that it wants to keep hidden! While some of the dirty little secrets are hard to stomach, we wanted to share four secrets of the trade with our readers.

The (not) so good, the bad, and the ugly

1. Living a Lie: Many people incorrectly assume that anyone flying by private jet must be affluent. In reality, this isn’t always the case! By using a private jet charter instead of purchasing their own private jet, a person can assume a false sense of wealth. For example, they can maintain their status of “private jet connoisseur” without needing to pay for the upkeep and managing costs that would be required if they were to own the very same jet. Taken as an advantage, using a private jet charter still allows the customer to revel in the luxury and prestige of the jet, but, on the other hand, it may also make them come across as opaque to their clients, as if they’re hiding the state of their financial situation.

2. Lack of Lux: In the case of private jet charters, all that glitters is not gold. While there are many conveniences that can add character to a jet, these additional finishes are not as extravagant as they may seem on the surface. Since customers of private jet charters do not own the jets themselves, many of the selling points they’re pitched are merely marketing ploys to make a sale. It’s rare that the client receives a jet that is truly one of the finest in the industry. And if they do, the jet is likely to be accompanied by a higher price tag. Because the patron has no choice but to rely on the information provided to them, they can’t know for sure where the jet has been or is arriving from, how old the jet is, or a myriad of other logistical questions.

4. Constantly Compromising: The industry is always trying to cut costs in order to maximize their profits, so it isn’t uncommon to see more imperfections than one would if they owned a private jet, whether it be noticeable in the food served or in the semi-luxurious interiors. Every time a consumer rents a private jet, they run the risk of insufficient quality and diminished value for the price.