You are here: Home / Private Jet / 15 Celebrities and Their Private Jets 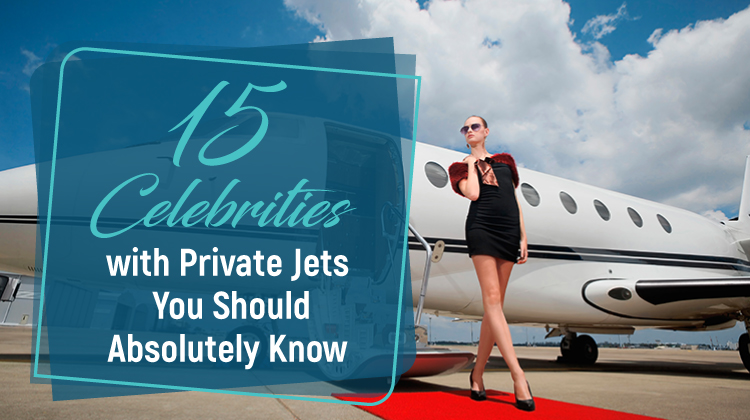 When it comes to the private jet industry, you need to know who is who. Comprised of businessmen, celebrities, and politicians, here are 15 impressive moguls who have worked their way into the private jet field.

1. Bill Gates: Microsoft co-founder and recipient of the prestigious Presidential Medal of Freedom, Bill Gates is the world’s richest man. Not surprisingly, he understands the great freedom offered by private jets.

2. Prince Alwaleed bin Talal Al Saud: A Saudi business magnate and billionaire, he owns the most expensive jet in the world: the Airbus A380, worth over $500 million.

4. Jimmy Buffett: The American singer of the infamous “Margaritaville,” Buffett owns and flies his own private jet.

6. John Travolta: Along with being an extremely successful actor, Travolta became registered as a pilot and is the official ambassador-at-large for Qantas Airlines. In addition, he owns 11 jets, including a luxurious Boeing 707.

7. Celine Dion: She captured the world with her voice, but beyond that, she also inspires women by owning an opulent private jet.

8. Jay Z: Rapper turned businessman and political activist, Jay-Z received one of the most glamorous Father’s Day presents ever from his wife, Beyoncé: a Bombardier Challenger 850 worth a stunning $40 million.

9. Donald Trump: Billionaire, real estate mogul, and the President Elect of the United States, Trump boasts one of the largest private jets in the world, a Boeing 797.

10. Oprah Winfrey: As the talk-show queen, Oprah noted during her commencement address at Duke University that “despite graduating from Duke, owning a private jet is one of the marks of being truly successful.”

11. Jim Carrey: Jim Carrey is known for being the comedy king of Hollywood, but did you know that he also owns the palatial Gulfstream V?

12. Angelina Jolie: A philanthropist, role model, UN ambassador, and actress, Jolie is well-known for taking private jets to travel across the globe to make it to her appearances on time.

13. Harrison Ford: The legendary American actor loves to take solo rides in his jets. When addressed about the environmental concerns of owning over seven of them, Ford elaborated that he only flies one at a time, making sure to never be wasteful.

14. Tom Cruise: Cruise is acclaimed for his illustrious film career, but he has also discovered a new hobby in owning a private jet. Like Jim Carrey, Cruise also prefers the Gulfstream make.

15. Mark Zuckerberg: One of the youngest billionaires in the world thanks to creating Facebook, Zuckerberg flies to meetings on private jets to bolster his protection and also to save himself the hindrances of flying commercially.