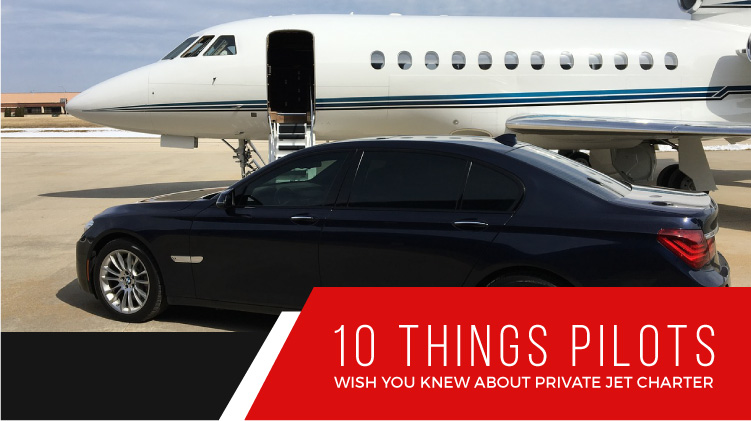 To a lot of people, flying in private jets falls into the realm of the unknown and the intimidating, something reserved for the rich and famous. But with the advent of jet charter services that allow more and more people – not just the most well-heeled – to fly privately, a lot of misconceptions stand to be broken. Here, we look at a few things that private jet pilots wish more people knew.

One misconception is that private jets can’t go as fast as large commercial planes. Even though speed depends on the type of aircraft, there are private jets that can fly faster than commercial. One thing’s for sure, though: when traveling by private jet, you’ll be cutting down on time spent waiting while on the ground (and sometimes, on the plane before takeoff).

Another luxury of a private jet charter is you can travel to anywhere you want to, at any time, as they’re not bound to the same flight schedules as commercial airlines are.

3. It’s not just for the wealthiest.

While private jet charters are not cheap, they are certainly not as prohibitively expensive as they are often thought to be. Besides, nowadays there are flight-sharing services that make flying jet charter less expensive by allowing you to split costs with other passengers.

Some people believe smaller private jets are riskier than large commercial airliners. The truth is, as long as they are well-maintained, private aircraft are very safe.

5. You deal with fewer flight cancellations.

Private jets don’t always have to cancel when bad weather or airport issues force commercial aircraft to. This is because private jets can more easily access other options, such as changing their flight path or choosing alternate airports.

6. The pilots love what they do.

The road to becoming a pilot is long, arduous, and expensive. So it’s highly likely the person flying your plane is someone who made great sacrifices to make his dream job a reality – and is dedicated to the profession.

7. Transporting A-list celebrities is a routine part of the job.

Famous actors and musicians, big-shot athletes, and politicians are common passengers, so a lot of private jet pilots aren’t fazed by a passenger’s celebrity status anymore.

8. However, a lot of their passengers prefer to keep a low-profile.

Flying by private jet isn’t all about glamor and “arriving in style.” In fact, a lot of the influential people that fly in private jets are businesspersons who keep out of the public eye.

9. After all, ‘private’ does mean private.

Even first-class on a commercial flight doesn’t afford the same level of privacy provided by private jet charters. Groups can comfortably hold meetings on confidential matters, and passengers can sleep, eat, and enjoy entertainment without worrying about strangers. Flight crews in private planes are often held to strict standards of discretion regarding their passengers.

Private aviation is an industry with a lot of promise of growth, especially now that services like flight-sharing applications have started to bring private jet charters to a much wider market.